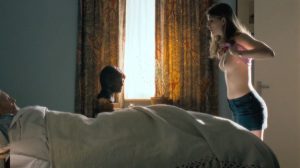 Jodie Whittaker, the star of the Broadchurch television series, will be the first woman to play the role of Doctor Who! There were conflicting opinions: some applauded the decision, others challenged it. We, of course, had one thought: do we have we any Jodie Whittaker nude video? Yes of course, taken from the film Venus, in which the beautiful English actress shows naked in front of the camera for our pleasure. So, waiting to see Jodie in the clothes of one of the television’s historical characters… you can admire her without clothes!