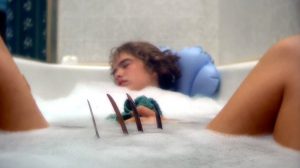 Is there really someone who doesn’t know Freddy Krueger? A Nightmare on Elm Street is the first film of a long series featuring Freddy, one of the most famous movie serial killers. After being burned alive by the parents of the children he had killed, Freddy lives in the dream world, torturing and killing the people who fall asleep.
Between a bloody scene and another, there is also time to see a couple of sexy sequences, thanks to actresses Amanda Wyss and Heather Langenkamp. Not much, but we can see Heather Langenkamp in a sexy petticoat and Amanda Wyss naked in the bathtub.