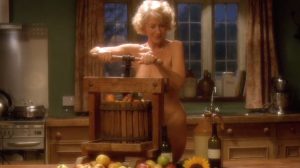 If you’re interested in the “mature” genre, Calendar Girls offers a nice list of nude actresses who were over 50 when the film was released.
A group of women decides to pose nude for a calendar that will be used to raise funds for a hospital: because of their age, it will have a very high media popularity.
Naked or almost naked in front of the spotlight are Angela Curran, Annette Crosbie, Celia Imrie, Georgie Glen, Helen Mirren, Janet Howd, Julie Walters, Lesley Staples, Linda Bassett, Penelope Wilton, and Rosalind March.