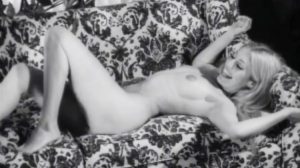 On the poster of Alice in Acidland, a kind of docu-movie from 1969, is written in large letters: “This is not a fairy tale!” So what’s this film in black and white that brings together three beautiful naked actresses? In the intentions of those who carried it out, it’s a documentary that warns the use of drugs, but that is actually a mixture of absurdity and nudity. Alice and her friend Kathy are invited to a pool party by Freida, a teacher. At the party Alice gets drunk, she takes an acid and immediately becomes a lesbian, so she has a hot bath with the teacher. Kathy also becomes uninhibited in five minutes and has sex with a guy at the party. Alice then has sex with a guy who does not take off his boxers… In short, 55 minute of sex to entice young people not to take drugs. We hope that the message has arrived. The beautiful nude actresses in this film are Julia Blackburn, Janice Kelly and Sheri Jackson.