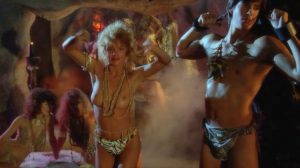 After Angel and Avenging Angel, here’s the third chapter of the saga: Angel III: The Final Chapter.
Molly (who is played by a different actress in each film) is a journalist today. Involuntarily, she snaps a photo of her mother, who had abandoned her fourteen years ago. Molly discovers she has a sister too, lost in prostitution, and she tries to help her.
Laura Albert undresses on stage, while Bella Donna serves the cocktails topless. Barbara Hammond does a topless interview and Julie K. Smith stars in a movie set in the jungle. The latest topless of the film is given to us by Roxanna Michaels.