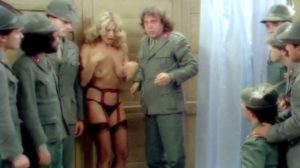 Four rookie comedians set out from Verona for Rome, intending to break into the world of cinema and television. Initially, everything seems to go wrong, and the four guys end up involved in a variety of crazy affairs.
Orchidea De Santis plays the classic sexy comedy actress, who takes off her clothes at the first opportunity, showers for no real reason, and sleeps in lingerie despite the fact that there is a blizzard outside and the thermometer is below zero. Cindy Leadbetter plays a very uninhibited Swede.