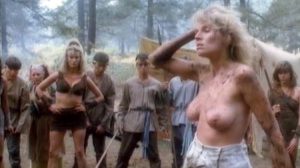 Barbarian Queen II: The Empress Strikes Back is presented as a sequel to Barbarian Queen, but it actually has nothing to do with the first film, except for the lead actress, Lana Clarkson.
The settings are similar, but the characters are different and the film is shot on a budget, with toy swords and several sequences shot indoors.
Besides Lana Clarkson, Elizabeth A. Jaeger and Orietta Aguilar are undressing.