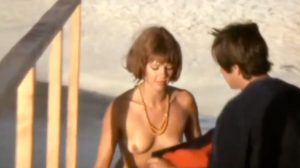 Bora Bora, by Italian director Ugo Liberatore, is the progenitor of the erotic-exotic genre. Roberto arrives on a South Seas island to search for his wife (Haydée Politoff), who moved away several years ago after a vacation together, tired of the marriage. Roberto attempts to win her back.
After less than a quarter of an hour, Doris Kunstmann undresses behind a curtain. The curtain is transparent, so we can admire her tits and ass. The actress covers herself with a towel, but in the following scene she takes it off to have sex with the main character. Haydée Politoff performs a sex scene a few minutes later, lying on a grassy dune. Polynesian Rosine Copie has sex with the protagonist in the next scene.
Two interesting nudes follow: Rosine Copie naked and covered in sand, and Haydée Politoff coming out of the water naked.