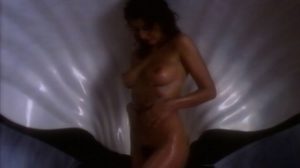 In the back of a boutique, paid sexual encounters take place. Sandra is one of the girls who frequent the boutique, but practically the whole city visits the shop, either as a customer or as a prostitute.
Boutique is a film by Lorenzo Onorati of the late 80s. The plot is non-existent, but the interest is mainly for the nude actresses Alma Lo Moro and Debora Vernetti, two girls who at that time were famous for the television show Colpo Grosso. Gianna Maria Garbelli and Lina Rossini also undress in the film.