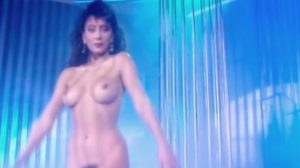 Alma Lo Moro is an Italian actress who has interpreted only a handful of movies, yet she has a fair number of fans. The actress made her debut in the entertainment world thanks to the sexy quiz Colpo Grosso, in which she participated as a competitor and then as a “Cin Cin girl”. Alma also participated in the German version of the show: Tutti Frutti.
Her performances as a Cin Cin girl are contained in our monograph dedicated to them, but we decided to create an extra monograph dedicated only to her, with her participations as a competitor and her stripteases which were presented at the end of the broadcast.