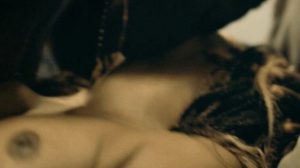 After a long and interesting career as an actress, Halle Berry turns to the camera and makes her directorial debut. In this Bruised, Halle plays an MMA fighter who lost her job due to some scandals. Now she is about to enter the underground fighting, where there are a lot fewer rules and a lot more money.
Halle Berry gives us some interesting nude scenes, including a lesbian sequence with Sheila Atim.