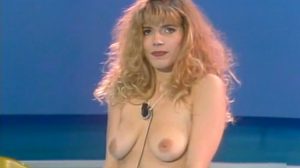 We have reached the twenty-second monograph devoted to the contenders of Colpo Grosso. There are not many more words to write about this sexy Italian show, which we have ever chronicled in numerous monographs.
The competitors are those from the fifth season, hosted by Maurizia Paradiso and Gabriella Lunghi. Each girl used to remain in the show for numerous episodes, and in each episode two girls competed.