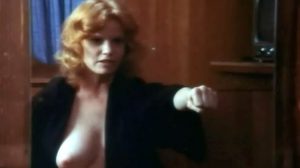 The story of Delinquent School Girls (AKA Carnal Madness) involves three insane people who escape from an asylum and terrorize the locals. That is, until they arrive at a school for girls, which might seem like the best place for three sadistic and maniacal crazies. Unfortunately for them, girls’ upbringing includes wrestling and karate, so they don’t let themselves be subjugated.
Colleen Brennan (credited as Sharon Kelly) and her roommate are having a heated argument after six minutes. The actress is wearing only a black kimono, from which her nice tits emerge. Afterward, Roberta Pedon performs sports exercises in her bra, making us drool.
Within a minute, a group of girls is doing gymnastics on the school lawn. Among them are Colleen Brennan and Roberta Pedon. As Roberta jumps, her big tits bounce out of her tank top.
A quarter of an hour later, we find ourselves at the home of a professor tutoring a student (Jane Steele). The two are on a sofa and he takes off her clothes, unfortunately not completely. Thankfully, right after that, Julie Gant shows us a pair of respectable boobs.
Again, the group of students, this time in the pool, are all wearing white and transparent bathing suits. In the group are Colleen Brennan, Betty Johnson, Brenda Miller, and Valerie Anderson. In the following scene, Colleen Brennan and Kay Lange are exercising on the floor of their room, while Debbie Raymond kisses Roberta Pedon’s boobs. Their gym teacher (Zoe Grant) is teasing the rector with black lingerie and stockings. The last long nude scene stars Debbie Raymond and Roberta Pedon and includes a mud fight.