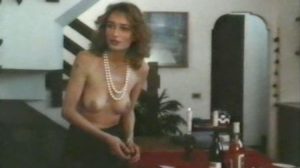 A painter loses his wife and inspiration at the same time. He tries in every way, even exhuming his wife’s corpse, but the only thing he gets is more and more insanity. One day he meets a pianist identical to the woman he loved and invites her home in an attempt to gain his creative impulse from her again.
Blood Delirium (original title is Delirio di sangue) is a horror film made by director Sergio Bergonzelli in 1988. Despite an interesting plot and some valid ideas (eg blood used as paint), the film is boring.
However, it’s a very rare film, and equally rare are the nude scenes of the actress Brigitte Christensen. It is also an opportunity to admire Lucia Prato naked, a beautiful actress who gave us few interpretations, between the end of the 80s and the end of the 90s.
Olinka Hardiman‘s nude is certainly less rare, but we always look at her with pleasure. In this film, she is credited as Olga Hardiman.