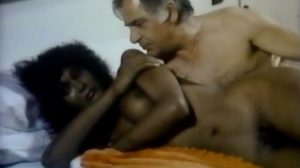 Erotiki ekstasi (AKA Love Lust and Ecstasy) is a Greek film by director Ilias Mylonakos. It’s the story of a wealthy businessman who resides in a villa in Corfu with his wife Sara (Ajita Wilson). The man has a speedboat accident and must be admitted to a clinic in Switzerland. His wife, his personal painter, and secretary Theresa (Mirella Venturini) remain in the villa. While the businessman is in the clinic, his wife consoles herself with the painter. But things will not end well.
The film exists in two versions: softcore and hardcore. The hardcore version enriches several scenes with real sex scenes, almost all of which star Ajita Wilson. These are not particularly imaginative sequences, but we watched them all with interest. The most interesting parts are the rare blowjobs scenes by Mirella Venturini.