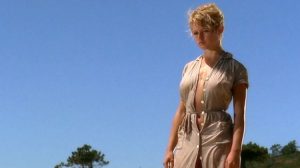 With Et Dieu… créa la femme, director Roger Vadim creates a hymn to eroticism. The story is poor: a girl is forced to marry a man, but she loves his brother. The film, however, does not serve to tell us a story, but to show us the instinctive beauty of the legendary Brigitte Bardot, an extraordinary sexy bomb, who walks barefoot throughout the film (a great gift for foot fetishists) and excites the protagonists and spectators.
The film is from 1956, so Brigitte Bardot doesn’t strip a lot. At first, we see her sunbathing totally naked, and during the film, the actress delights us with other very interesting sequences.