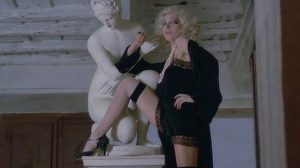 When a friend is killed by the fascists, a village farmer takes up residence in a Roman brothel and together with an anarchist prostitute plans a way to kill Mussolini.
Film d’amore e d’anarchia is a masterpiece by director Lina Wertmuller with a few nude scenes but with several interesting sequences. The brothel prostitutes are interpreted by Enrica Bonaccorti, Giuliana Calandra and Mariangela Melato.