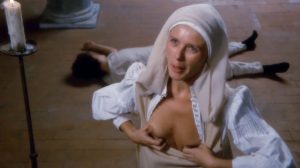 The film tells the true story of Flavia Gaetano, a cloistered nun who really existed in the fifteenth century. She’s an interesting and feminist character. The woman enters the convent against her will, as often happened in that historical period, but she manages to escape from the convent thanks to an army of Muslims.
In the first nude scene, Raika Juri opens her cassock and shows her tits. This is the first and only nude scene of this Yugoslavian actress, who starred in a handful of Italian films in the 1970s. In the following scene, Franca Gray has sex with a villager, lying on the straw, among the pigs. The sex scene that follows is also played by Franca Gray.
Florinda Bolkan is the main protagonist, but she barely undresses. Anyway, we can admire her naked in a couple of sequences.
Would we have liked to see more nude scenes? Yes, but we know the film enters the nunsploitation genre more by historical circumstance than by purpose. It seems that Gianfranco Mingozzi had a more cultured idea than an erotic one when he made it.