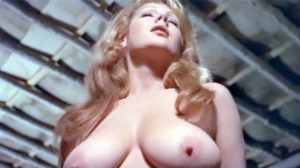 Fra’ Tazio da Velletri is a rare decamerotic film initially shot by Joe D’Amato, but completed by Romano Gastaldi. Nuccio Tornaquinci passes himself off as a friar (Fra’ Tazio) who practices exorcisms. The nobles entrust their wives to him, but the exorcisms take place under the covers, with naked bodies entwined together. Word spreads among the noblewomen and they all want to be exorcised by Fra’ Tazio.
Meanwhile, the real Fra’ Tazio da Velletri wanders around the territories of Florence and the women lift their skirts in front of him, asking to be exorcised.
Funny decamerotic, which undresses almost all actresses. Christa Linder is the first to show us her boobs, then there are Claudia Bianchi, Margaret Rose Keil, Eva Maria Gabriel, and Lida Sini. The last to undress is Annie Carol Edel, who also shows us a fleeting full-frontal nude.