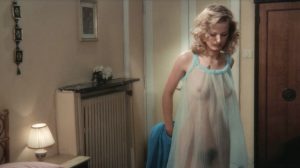 Dr. Otto Frankenstein is a mad scientist who creates a monster by assembling various corpse pieces. The monster is called “Mosaic” and obviously we are watching a film adaptation of the famous novel by Mary Shelley, in a modern key.
The monster is sexually attracted to beautiful women (well, not just him), but his love affairs all end badly. Nude in front of the camera we have Ann Odessa performing in a striptease, Dada Gallotti in the role of a sexy butcher, Dalila Di Lazzaro wearing a super sexy and super transparent dressing gown, Marisa Traversi in the role of a prostitute, and Renate Kasché in a short sequence in the car.