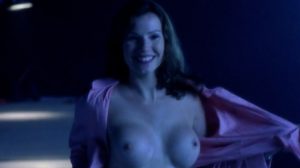 Freddy vs. Jason is a crossover that brings together two of the most famous horror movie icons in the world: Freddy Krueger and Jason Voorhees. Freddy is the protagonist of the A Nightmare on Elm Street film saga, while Jason of the Friday the 13th saga.
The two will compete to the death, obviously involving all humans who will find themselves in their way. The blood will flow freely and between one beheading and the other we can also admire a couple of nude actresses: Odessa Munroe and Tammy Morris.