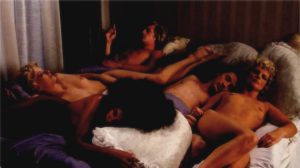 Today we talk about Gisela Hahn, a beautiful German actress who debuted in 1969 and she has starred in over fifty films in her career.At CinemaCult, of course, we are interested in the films that show Gisela Hahn naked. Today, for example, we speak of a classic noir film by the director Fernando Di Leo: I padroni della città It is a noir from 1976 with some contamination from another popular genre in those years in Italy: the detective story. A film almost entirely with male actors, which isn’t full of naked actresses, but that gives us some good sequence with Gisela Hahn.