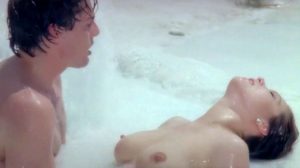 A woman (Ornella Muti) moves to a small town after the death of her lover, who provided for her. A rich, elderly man offers her hospitality. In return, she must listen to his love stories.
At the beginning of the film, Ornella Muti is lying on her bed. She is reading a book and wearing a white robe, with a very intriguing neckline. A moment later she’s standing in front of the closet, her ample breasts trying to break out of the confines of the fabric. Twenty-five minutes later, a very young Sabrina Ferilli excites the protagonist and the viewers. The actress is sitting in an armchair, wearing a black dress and stockings. She spreads her legs and smiles mischievously. Three minutes later there is Ornella Muti sitting in an armchair. She is dressed, but she touches and caresses herself sensually. To see Ornella Muti naked we have to wait 39 minutes when the actress finally takes off her clothes for a solfatara sex scene. Two minutes later another fleeting nude, as we watch the actress put her clothes back on, her back turned. On a couple of occasions, Ornella Muti wears a top that lets us admire her turgid nipples pushing under the silk.