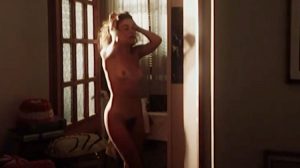 An art critic specializing in art forgeries tries to engage a young actress (Claudia Gerini) to act out a strange script. The actress shares an apartment with a photographer (Susan Lynch), and she’s the one who wants to act.
Less than five minutes into the film, Claudia Gerini shows us a breathtaking full-frontal nude. Young and beautiful, this actress left us speechless. Half an hour later, Susan Lynch strips down for a sex scene. Five minutes later, Susan Lynch gets out of bed and we admire the second full-frontal nude of the film. Before the film ends, Susan Lynch strips a few more times.