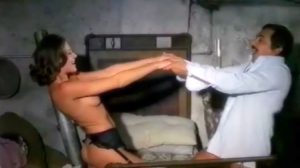 Luca is a womanizer who gets all the women in the country. One day he rescues an American girl who was committing suicide. The two fall in love and the whole village tries to get them married.
After five minutes we can admire the first naked actress. Paola D’Egidio takes off her robe, intent on having sex with the main character, and shows us a full-frontal nude. After fifteen minutes, the protagonist has an amorous encounter with the sensuous Loretta Persichetti, who strips for him. And for us.
Later, we witness another fabulous scene: Rita Silva plays an exhibitionist German woman, who undresses in a meadow eager to copulate. Later, Rossana Podestà doesn’t undress but wears transparent lingerie that makes us horny. Anna Zinnemann is also very sexy, and we see her a few minutes later. The following nude is offered by American actress Sherry Buchanan. Five minutes later, Patrizia Webley and her big boobs are featured in a very intriguing scene.