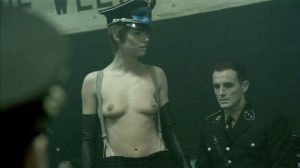 A film of the Italian director Liliana Cavani, released in 1974, was immediately reported as one of the most controversial of that period: The Night Porter. Forty years later it is still a disturbing film due to the plot. We, however, who are superficially interested in the nude celebrities, find there is an enjoyable ingredient in this film: Charlotte Rampling naked. One of the most famous nude of Charlotte Rampling ever, the picture topless and harnesses we have seen so often associated with The Night Porter. Sequences are highly sensual and we present them in HD.