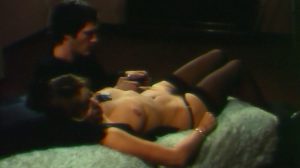 Davide is a photographer specializing in nudes. He goes to live in the house of his model, Viviane (Martine Brochard), a French woman who is married but open-minded.
When Davide gets bored with Viviane, he tries to lust the waitress Tonina (Gloria Guida), a young and sexy girl from Bologna.
Il solco di pesca is one of the most interesting films for Gloria Guida fans. Shot in 1975, it is one of the first films played by this queen of Italian erotic cinema, which shows itself in all her beauty, with spicy scenes and full-frontal nudes. Martine Brochard is equally intriguing, with nudity and plenty of material for those who love stockings and tights.