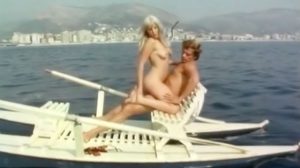 Italian-German hardcore film shot on the Italian Ligurian coast. The original title is Italienische Früchtchen in the softcore version, while the hardcore version is titled Angela – Körper in Ektase. We don’t know much about this film, but vintage hardcore is often lacking in information. It’s a very rare film.
The wife of a German billionaire is kidnapped while the two are on vacation in Italy. The Italian police take an interest in the case and we follow the various vicissitudes to free the woman. In between scenes, we enjoy several fucks.
The first scene is with Helen Thomas, who has sex in a secluded place, in her car, while thugs watch her with binoculars. Twenty minutes later, Sandra Nova has sex with a colleague of hers on a hotel room bed. The third hard scene in the film is a lesbian sequence involving Helen Thomas and Inge Binder.
Ten minutes later, Inge Binder has sex with a man on a paddleboat in the middle of the sea. Later, Helen Thomas has sex with one of her captors. Sandra Nova and Inge Binder star in the last two sex scenes of the film.