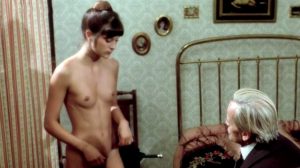 How many versions of Jack the Ripper were offered at the cinema? One thousand? Jesús Franco also offers us his, slightly different from the official version, with the girlfriend of the protagonist inspector who is also the mother of the murderer. The parts that interest us are those pre-ripping and have as protagonists Esther Studer, Josephine Chaplin and Lina Romay.