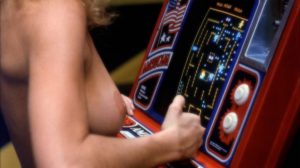 In the 80’s the geeks were not as cool as they are today, but as nowadays they ran to the movies to look at nude actresses. And there was another thing they did at that time: hours were spent on videogames. The director Greydon Clark had a brilliant idea: to show tits and videogames in the same film. So the movie Joysticks was born. It’s certainly not a masterpiece, but seeing tits and Pac-Man in the same frame is priceless. This is probably the first film inspired by videogames, ten years before the most famous Super Mario Bros, that opened the genre of gameplay movies as we know it today. The list of nude celebrities is long: Kym Malin, Lynda Wiesmeier, Erin Halligan and Kim G. Michel.