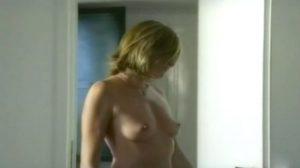 Francesca (Giuliana Gemma) rents the house in which she lived as a teenager. No one in town remembers her, but she remembers everything about her, especially the tragic death of her mother.
La donna del delitto is a film made in 2000, but it reminds us of a crime movie of the 80s. Among the performers, we find one actress we loved at that time: Cinzia Monreale. She is blonde, beautiful, and she gives us a sex scene and then a bikini sequence.
The leading actress is Giuliana Gemma. Daughter of art (her father is the famous actor Giuliano Gemma), this sensual brunette has only starred in this film. We can admire Giuliana Gemma naked in the shower, and then in a very intriguing sex scene.