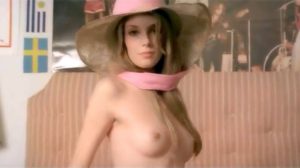 The very long title of this film is Perdutamente tuo… mi firmo Macaluso Carmelo fu Giuseppe. The film was made by Vittorio Sindoni in 1976, and it’s a comedy that often veers into drama. After fifteen years of hard work, Carmelo returns to Sicily from Germany. He drives a Mercedes and carries 100 million Italian lire. People start looking for a way to get their hands on this money as soon as he arrives.
The elegant and sensual Macha Méril indulges in brief and floating nudities. The actress still lets us admire her tits. By contrast, Cinzia Monreale gives us some breathtaking full-frontal nudes. There is also a sequence with Marisa Laurito nude. This actress has stripped very few times and has a fair number of fans happy to see her without clothes on.