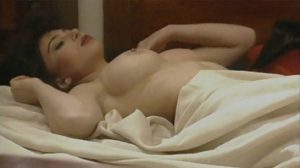 Let’s start with the title. The original title of this film is Lucrezia Borgia, but based on the following VHS releases it is also known to the audience as Borgia and Le castellane.
There is not much to say about the plot. Director Lorenzo Onorati takes a handful of beautiful nude actresses and makes them copulate, placing them in a kind of sixteenth-century context. He doesn’t tell us much about the Borgia family, except what went on under the blankets.
Naked actresses are some of the most exciting women of 90s Italian cinema: Carmen Di Pietro, Gala Orlova, Giovanna Chicco, and Lucia Prato.
Big tits, threesomes, lesbian scenes… the critics have slaughtered this movie, while we love it.