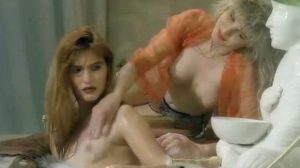 Lolita (Petra Scharbach) runs away from home and experiences adventures on the road, meeting new people almost every day. One day, she meets Marco and spends several days with him in Rome. When a minister from the Soviet Union arrives in Rome and someone tries to cheat him, Lolita unveils the fraudulent plans and the minister’s gratitude turns into a lucrative business for Marco.
Weird plot to put together several erotic episodes with the sensual Petra Scharbach, maybe too mature to be defined as lolita, but definitely hot. Together with Petra, we can admire Virna Anderson (Virna Bonino), also in a soft-lesbian sequence.