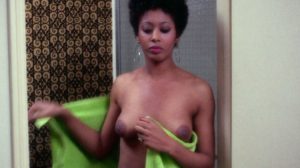 Two American soldiers desert and flee to Europe, each taking a different path. They both end up involved in the underworld and meet again in Rome, where they decide to leave everything behind and flee to Canada.
Mean Mother is a commercial operation by producer Samuel M. Sherman, who bought a Spanish film (El hombre que vino del odio) for distribution on the American market. Convinced that audiences would not watch it, the producer re-edited it, adding new sequences and turning it into a blaxploitation film.
Marilyn Joi gives us some very intriguing sequences, including a full-frontal nude in the pool. For lovers of big tits, the Robyn Hilton scene is not to be missed.