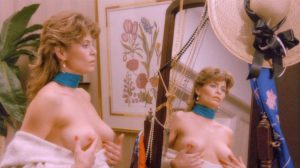 In Italy, the film has been presented as a sequel to The Texas Chain Saw Massacre franchise, but it’s not part of this series at all. It’s the story of a serial killer who wears a monstrous rubber mask and clawed gloves when he goes after his victims. The killer reminds us of Freddy Krueger from A Nightmare on Elm Street.
Our favorite parts are those with Tara Buckman naked. This intriguing actress shows us her breasts in three sequences. In the first, she peels off her shirt in front of the mirror and massages her breasts. In the second, she is lying on the bed with her shirt unbuttoned. In the third, she is at home waiting for her man, with her face in makeup and one breast sticking out of her robe.