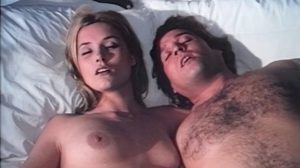 Paolo Barca, maestro elementare, praticamente nudista is a rare movie of 1975.
Paolo Barca is a nudist professor who moves from modern Milan to Catania, Sicily. His life will change, both as regards work at school and in his private life.
During the opening credits, some paparazzi are photographing naked women and men on a nudist beach. They look like repertoire sequences, but among the many strangers, we can see Florence Barnes completely naked. A few minutes later we can admire a rare nude by Valeria Fabrizi, an actress who has stripped very little in her career. The woman has sex on a boat with the protagonist.
We have to wait almost 45 minutes for the next passionate scene. Magali Noël undresses to have sex with the protagonist in a train compartment.
The next sex scene takes place in the school infirmary, where the protagonist goes with one teacher (Liana Trouche). After several copulations with mature women, the protagonist has a sex scene with a younger actress, the sexy blonde Janet Agren.