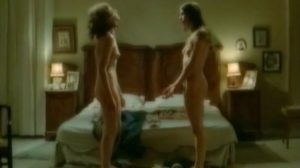 Porci con le ali is a film released in 1977, loosely based on the novel of the same name published the year before and written by Lidia Ravera and Marco Lombardo Radice. The authors of the novel didn’t like the film, and the audience also had mixed opinions. The film, like the novel, tells the love story of two young Italian students in the 1970s, politicized like almost everyone else at that time.
For us, the most interesting part is the full nudity of the main character, Cristiana Mancinelli, who gets naked in some scenes. There is also a lesbian kiss between Benedetta Fantoli and Cristiana Mancinelli, both topless.