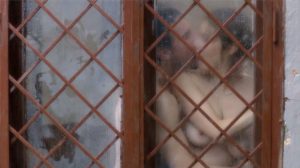 Questo è il mio paese is a television miniseries that takes place in a fictional town in Sardinia. Anna (Violante Placido) becomes mayor of her town. The woman is younger than forty and has no political experience, but she must fight against power and the Mafia to defend her integrity and that of the town in which she lives.
In the first episode, Violante Placido gives us a beautiful sex scene. The actress wears a black robe, but her partner lowers it to free her breasts. In the third episode, Valentina Romani takes off her shirt and remains topless, then throws herself on the bed with a guy. In the fourth episode, we admire Violante Placido naked again, sitting on a bed. A moment later the woman is wearing a semi-transparent robe. In the fifth episode, we witness another very intriguing sequence. It’s raining and we are outside a house. Inside are Violante Placido and a man having sex, and we spy on them through the window.