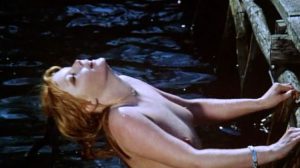 Reazione a catena, also known as Ecologia del delitto, is an Italian thriller directed by Mario Bava in 1971. Forerunner of the slasher movies, the film begins with a countess killed by her ex-husband, who is killed shortly after. From now on, the murders pile up on top of each other. Some critics wrote that this film was an inspiration for films like Friday the 13th and Halloween.
There aren’t many nude scenes, but it’s impossible to remain indifferent to the full-frontal nude of the gorgeous Brigitte Skay, who strips down to take a bath in the lake.