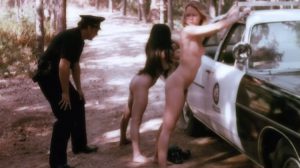 A wicked real estate agency, in league with the municipal powers, wants to close a couple of schools, merge them and build a shopping center. The cheerleaders hatch a plan to screw up these plans and save the school.
Yet another film starring cheerleaders who raise their shirts as well as their arms. There is no shortage of jokes, basketball games, various ballets, and foamy showers.
Patrice Rohmer and Helen Lang are the actresses who strip the most during the film. A very interesting triptych of full-frontal nudes in the woods. Patrice Rohmer and Helen Lang walk completely naked in the woods and meet a handsome blond guy, then they go to the side for a threesome. Returning from the sexual performance, still completely naked, they are stopped and searched by a policeman. Other nude scenes are offered to us by Jerii Woods and Susie Elene.
The film also features Cheryl Smith, but we can only see her naked in a frothy scene because during the filming she was pregnant with her (and in fact, she shows her baby after the credits).