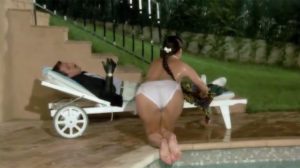 Roba da ricchi is a comedy film made of episodes. Released in Italy at the end of the 80s. There are a few nude sequences, but there is a Serena Grandi nude that deserves the highest marks. The couple composed by Paolo Villaggio and Serena Grandi, which we had already enjoyed in Rimini Rimini, is re-proposed here. In front of Serena Grandi‘s tits there is not much to say. Observing them in silence and for a long time is all we can do.