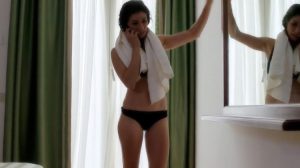 Squadra antimafia – Palermo oggi was a very interesting Italian television series, lasting eight seasons and dedicated to a police team fighting with the Sicilian mafia. The main villain of this television series was Rosy Abate, the Queen of Palermo. A woman who in eight seasons makes a great transformation, from a good girl to a ruthless criminal. A negative character, but with many moments of kindness. The classic villain that is loved by the audience.
Rosy Abate: La Serie is a spin-off from that successful television series. Played by the charming Giulia Michelini, this first season does not give us many interesting sequences, but there are several intriguing moments with this beautiful actress.