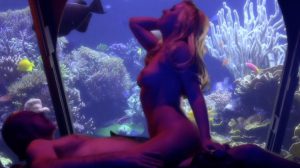 It’s been nearly twenty-five years since the first Samurai Cop, and people are convinced that lead actor Mathew Karedas, also known as Matt Hannon, is dead. To remind the world that he is still alive, the actor produces this second chapter thanks to crowdfunding.
The characteristics of the first film are not lacking: bad dialogues, acting at the lowest levels, but above all naked actresses. Among the various sequences, our favorites are Bai Ling, Lexi Belle, and Zoey Monroe in a lesbian threesome and Charlotte Stokely and Rachel Roxx having a duel in the snow, naked.
The nude scenes with Misty Stone, Kayden Kross, and Brooke Jost are also interesting.