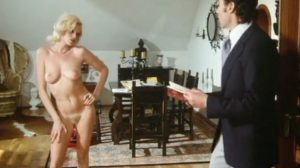 The long original title is Schulmädchen-Report 11. Teil – Probieren geht über Studieren. Instead, the US title is Schoolgirl Report 11: Trying Beats Studying.
It is also known as Blue Dreams and Naughty Freshmen.
It’s the eleventh installment of one of the longest-running sagas in erotic cinema. Fake documentaries on the sexual habits of Germanic schoolgirls. In this specific chapter, some professionals discuss around a table during a radio broadcast.
The first episode tells a sad love story. A girl goes to her boyfriend’s house and finds a naked woman (Jane Iwanoff) on his bed. The girlfriend runs out of the house and kills herself. Good start for a comedy film.
In the following story, Karine Gambier tells of being molested by her tutor. We witness the same scene in two versions: first described by her, then told by the tutor, who claims to have been seduced. We enjoy three sequences with Karine Gambier naked, thanks to all these narratives.
Alexandra Bogojevic and Inga Werdenigg are the protagonists of the following episode. They both want to lose their virginity and arrange a foursome in a barn, together with two boys. The scene is very exciting and ends with the barn half demolished. Next story: Angélique Duvier is a depressed girl as well is blackmailed by a group of imbeciles who have hard photos of her taken without her knowledge.
In the final story, Marianne Dupont and Sandra Atia tell how they lost their virginity. The former visits a sick schoolmate and ends up in bed with him; the latter has sex with a boy in a barn while a horse spies on them.