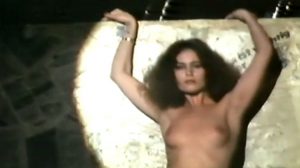 Rare 1977 film by director German Lorente. Alan is a director in crisis, and Anne (Corinne Cléry) is a woman who has to work as a stripper to support herself because her husband is in prison. Alan thinks it would be interesting to make a film about Anne’s life and invites her to his villa, which he shares with Silvia (Pilar Velázquez), his lover and financier.
Both actresses give us interesting nude scenes. Corinne Cléry is the actress who strips the most, and almost every sequence is a striptease on a club stage.