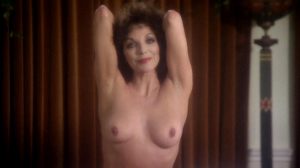 A year after the release of The Stud, Joan Collins returns to play the role of Fontaine in this sequel: The Bitch.
In this film, we find Fontaine as the manager of a trendy nightclub who has problems with several men. Her lovers of her, and the mafia who would like to take advantage of the disco.
Despite the rather strong title, The Bitch has some very delicate erotic scenes. Joan Collins strips a lot, and with her, we can also admire some nude scenes with Pamela Salem and Sue Lloyd. There is also Vicki Scott, uncredited, in a beautiful scene of naked women in a swimming pool, alongside Sue Lloyd and others.