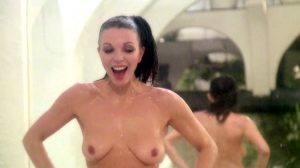 Many of you know Joan Collins because she had the role of Alexis Carrington Colby in the famous tv serie Dinasty. But some years before this, Joan was known mainly by nude actresses collectors because she made many films naked. One of this is The Stud. The wife of a rich businessman is bored and spend her time in a night club owned by her husband. Or, better, she spends her time with the night club’s manager. The manager is bored with her and spends his time with his lover’s daughter. This long list of cheatings let us see Joan Collins nude playing the role of the mother and Emma Jacobs nude as her daughter. And if these nudes aren’t enough, you can enjoy also the beautiful Felicity Buirsky, Minah Bird, Pat Astley and Susie Silvey.