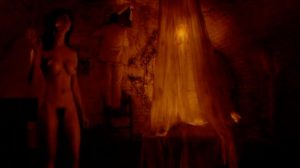 In a dystopian Europe, a policeman investigates with unconventional methods. His prey is a serial killer. The Element of Crime (original title is Forbrydelsens element) is the debut film by Lars von Trier, one of the most innovative directors in contemporary cinema.
The nude scenes are offered by the Burmese actress Me Me Lai and are the latest in her career, which ends with this film. After the beautiful full nude of this film, in fact, the actress disappears from the scene until 2014, the year in which she takes part in some events dedicated to genre cinema.