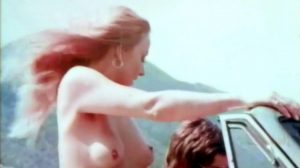 Other rare sequences taken from a rare film. We are talking about The Rogue, whose original title is Nokaut. It is a dramatic film of 1971, made by the Slavic director Boro Draskovic. In the cast, two fabulous actresses: Barbara Bouchet and Margaret Lee.
The video sequences are unfortunately not of the highest quality, but they are unmissable for the Barbara Bouchet fans; in this film she’s particularly naughty.